Well – we have received apologies from Ben this month so he has asked me – Young Chris – to write this Month’s web report. Certainly big shoes to fill – and im grateful for the ‘development opportunity’ Ben but i do hope hat you are not grooming me to take over as the Club PR Officer …..

This is the first business meeting of the new 2016/17 Lion year – and we have a new President Lion Steve Bateman at the helm, with Lions Christoph Amos as his very able Club Secretary. Club Treasurer is still Lion Peter Irvine – rumour is that he loves the job so much he couldn’t give it up…not sure who has the other Club Roles – we’ll see who pipes up during the meeting…

Before the meeting was all a cuffuffle – no one could find the Lions Code of Ethics – very important when signing in a new member- luckily Andrew had an iPhone with him – and googled the Code of Ethics – now there’s modern Lionism!

President Lion Steve started the meeting at 19.59 – and welcomed all and wished all a happy new Lions year. Apologies received from Noel, Ben, Lisa and Elsie – definitely apologies from Lisa.

Anthony muttered that he didn’t think he lost the raffle last month – but that didn’t necessarily mean he doesn’t have a prize with him for this month’s raffles – we will see….

Lisa walks in 20.02 – reverting her apologies – apparently she can make the meeting this month!

The Club received a note of thanks from Ambleside Guiding – thanks for letting them attend the car show and run the pot shy – they managed to raise a total of £97 towards repairing the Guide Hut in Ambleside.

We received a letter of thanks from Windermere Youth Project- thanks for the kind donation of £200.

Our treasurer opened by saying ‘its going to be a long one im afraid’ – met with a groan from everyone. Money in from car show sponsors, raffles, wishing wells, bouncy castles and car shows. Money out to memorative plaques – and all sorts. Peter was right – it was a long treasurers report.

Lion Philip managed to win the 1st prize in the raffle he organised at the car show (something fishy going on there!) – He used some of it to pay his subs for the coming Lions year – and donated half of the remainder into our lions admin account.

Total profit from the lions classic car show this month will be in the region of £7,000 – a very successful event that has raised a fantastic amount of money for local charities Jigsaw Trust and South Lakes Carers.

A proposal was made by Lion Andrew to reimburse Steve and Lesley(non Lions) some expenses they incurred attending the classic car show. They have helped for four years in a row – traveling especially to help with the car show. A majority vote sealed the deal.

Philip updated us on his plans to start a new Leo’s Club (Young Lions aged 13 – 16) in the area – with a proposal to name it “South Lakes Leo’s Club” – we all agreed this is a good name. 7 Leo’s going tenpin bowling at a new caravan site just outside Morecambe on 15th July. 3rd August – taking the Leo’s to Great Tower with the Chenoble Kids (is that really what they are called?)

Leo Clubs are open to young people who have an interest in serving their local communities. These Clubs are sponsored by Lions Clubs and encourage young people to develop their leadership skills

if you know a Young Person interested in joining our Leo Club then please get in touch!

Lion Maggie led the conversation around Welfare – Staveley Parish Council are refurbishing Ings Playground – at a cost of £15,000 following flood damage – they have already raised £7,500 and are looking for donations toward the remainder. The club agreed unanimously that this was very worthwhile cause – and agreed to pledge a sizable donation.

Hawkshead First Responders are raising money to install defibrillators within phone boxes in the Hawkshead area (which apparently are only used for 999 emergency calls now everybody has mobile phone) – the club agreed to donate to this worthy cause.

A conversation was had about something that Ben hadn’t done with regard to getting publicity in the Gazette for our donation to St Mary’s Surgery and Goodly Dale Surgery – Or has he? – we don’t know as he is not here to tell us…. Christoph will call Ben at some point to solve the mistery…

Everybody was asking how Lions Noel is after his hip operation – Lion Peter reported that his health is improving and generally speaking he is “doing well”. We are all looking forward to him returning to Lions Club Business meetings in the near future.

Car Show this month was considered a huge success – even though we all got rather wet (due to the weather). Amazed with the amount of exhibitors that turned up – approx 290 exhibitors turned up – including cars, bikes, tractors, trucks. Gate takings were down this year due to the weather. Thanks to Laura and Chris Courty for your help, and to David Burstow and Graham Savlille for making the trip to the Lakes especially. This event will be repeated on 18th June 2017 – which is Father’s Day once again.

The Jingle Bell Jog will be repeated on 4th December this year – and will be organised in conjunction with Sight Advice South Lakes. Committee meeting to be scheduled soon…

The Lions Festival on the Glebe will take place throughout August. We will organise a bouncy castle, a pot shy and a soft toy tombola – with millions of minions to win! It was suggested that Philip should wear a minions costume – but he flat refused…

It brings us great pleasure to sign up a new member to the Club this month – Lion Laura Courty – or ‘Pickles’ as she will be known from now on (Pickles is her maiden name)! Pickles has already helped the club enormously with some fantastic work on raising sponsorship at the car show – and we are very pleased to sign her in as a member of the Lions. Lion ‘Uncle’ Anthony will be her Sponsor – and Anthony received a centennial Sponsor’s badge for his efforts. Welcome to the Windermere & Ambleside Lions Club Laura! 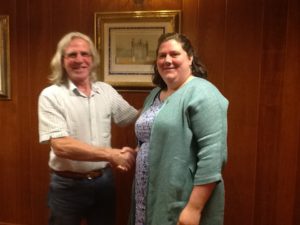 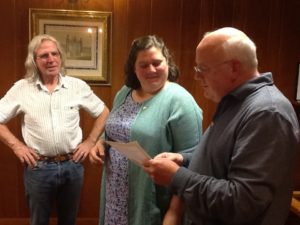 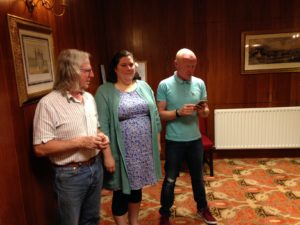 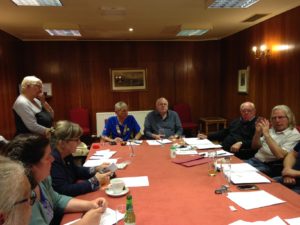 it was very quickly noted that Pickles has a tow bar on her car – so will be very useful towing the bouncy castle and Lions equipment around – very useful indeed! Lion ‘Uncle’ Anthony quickly clarified that Pickles can only be trusted to tow if driving forwards only – and that we should definitely NOT ask her to reverse as she is likely to crash!

Lions Steve won the prize in the raffle – a book about wine! Not that helpful with Steve’s vision impairment! Lion Christoph agreed to read it to him one day. Peter will bring the prize next month,

Twinning; Steve told tales of his cycle ride around France – and his visit to Limoux – he had a very enjoyable time with our twinned club Limoux Lions It was discussed that we should organise a club trip to visit them next year – and Steve is looking to arrive on his tandem – and is looking for a partner who looks good in lycra to join him – we discuss who would look best in lycra and couldn’t really decide….

Thanks to all involved in organising the Lions President handover meal at Windermere Golf Club last Sunday – food was lovely and so was the staff and the company – it was agreed that a good time was had by all!

With a toast to Lions Club International the meeting was drawn to a close at 22.28.